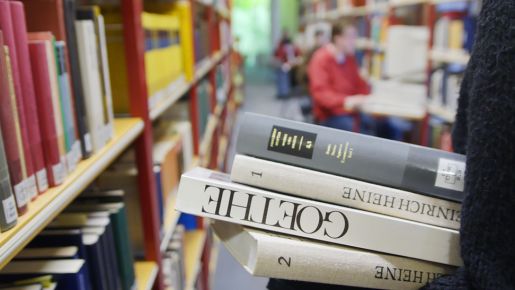 Following the publication of the funding programme in April 2022, it has become known that the DAAD will probably have noticeably less budgetary resources available in 2023 for its core mission of awarding scholarships and internationalising German higher education institutions. Therefore, we unfortunately have to withdraw the current call for applications.

In this programme, only follow-up applications of already existing GIP projects whose maximum funding period of nine years has not been reached can be submitted.

We hope to be able to call for proposals and select projects again as soon as possible.

The DAAD has funded German Language, Literature and Culture: Institutional Partnerships (GIP) between higher education institutions in Germany and other countries since 1993. The GIP have become established as a proven instrument for promoting the German language abroad: in addition to promoting academic exchange and the internationalisation of higher education institutions, the programme makes a significant contribution to maintaining and strengthening the status of the German language and culture abroad – as confirmed by the evaluation carried out in 2019.

The programme began with partnerships in the countries of Central, Eastern and South-Eastern Europe as well as in the USSR succession states. Since 2008, the programme has also been available for projects in countries in Asia, Latin America, Africa, with the addition of Israel and the Palestinian Territories in 2017. As of 2021, partnerships will be possible worldwide.

The ‘German Language, Literature and Culture: Institutional Partnerships Worldwide’ (GIP) programme forms part of the DAAD’s concept for the promotion of German: ever since it was first established, it has aimed at strengthening the internationalisation of German studies, both in Germany and worldwide. This includes the training of a new generation of early career academics as well as cooperation in the area of curriculum development in partner countries. At the same time, the German Language, Literature and Culture: Institutional Partnerships (GIP) seek to achieve a feedback effect on teaching and research at the German partner institute in that the students and teaching staff involved can develop a fresh perspective on their subject through international cooperation.

The long-term goals of the programme (impacts) are, firstly, for cross-regional partnerships between German and one or more foreign institutions to be established and for higher education institutions in Germany to intensify relations with their partner regions, thereby forming networks. Furthermore, the programme aims to support the maintenance and expansion of the teaching of German language and culture in the target regions and promote the development of innovative, demand-oriented and socially relevant formats in research and teaching.

The programme also aims to contribute to increasing the appeal of the subject of German Studies and German in other countries. Finally, German Language, Literature and Culture: Institutional Partnerships (GIP) seek to contribute to the communication of language, culture and literature from Germany to other countries and promote cultural exchange.
The following programme objectives (outcomes) are derived from these impacts:

Through its new funding programme , the DAAD and its partners are developing a scheme to support the academic training of future German teachers at schools and higher education institutions worldwide.

Please read the FAQs on the call for applications and how to apply: and the FAQs on impact-oriented monitoring:

Due to the COVID-19 pandemic, it is unfortunately not possible – even at the beginning of 2021 – to foresee when the planned and cancelled Project Leaders Meeting 2020 will be able to take place. We will inform you here as soon as it is possible to plan a larger-scale event with a realistic degree of certainty.

The documents prepared for the meeting are available here: