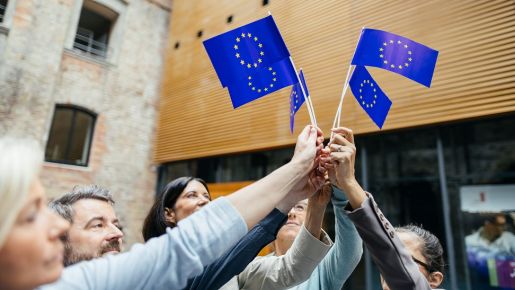 Climate protection, forced migration, digitisation, COVID-19: The global challenges that we are confronted with also here in Europe are immense – but can be met if common paths are found, negotiated, and implemented.

On 17 - 19 March 2022 149 DAAD alumni from 27 member states met in Berlin (Germany) and online to discuss the key challenges and opportunities of the EU in an interactive and results-oriented event and to collaborate in workshops to find solutions to Europe's most pressing issues.

The major EU-wide Alumni meeting entitled ‘Setting Out for the Future – How can we Drive Europe Forward?’ enabled participants from 27 countries to exchange views on the great challenges of our time, and to develop innovative solutions.

It’s not that long ago that there was public debate about what role Europe and the so-called West could still play in a world in which new political and ideological fault lines are constantly opening up. ‘The term Westlessness was even bandied around at the Munich Security Conference in 2020’, recalls DAAD president Professor Joybrato Mukherjee. ‘It was seriously questioned whether the West still existed. Can a true European identity even emerge in a complex set of circumstances, which is partly characterised by contradictory interests?’

Two years later we now realise that it can. Anyone seeing the faces of the DAAD alumni who came together from 17 to 19 March for an EU-wide meeting in Berlin felt their commitment and determination – precisely because they didn’t get caught up in the minutiae of different perspectives, but rather in jointly tackling the great challenges of our time. The title ‘Setting Out for the Future – How can we Drive Europe Forward?’ inspired them to commonly address major issues such as climate change, migration, right-wing populism and digitisation from a multidisciplinary and transnational perspective, and ideally to use workshops to develop policy recommendations. A total of 149 alumni from 27 European countries, including almost all EU member states and two Western Balkan states, participated – around 90 were on site in Berlin, the others joined virtually. 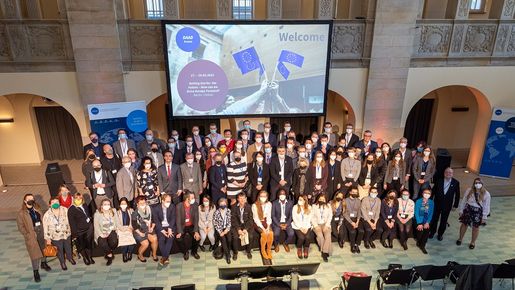 ‘An attack on the western world order’

Originally planned for October 2020, to coincide with Germany’s EU Council presidency, the unity and spirit of optimism that could be felt in Berlin was naturally also fed by the current geopolitical situation. ‘We need to recognise that the Russian invasion of Ukraine is also an attack on the western world order’, is how DAAD president Mukherjee expressed it in his introduction, stressing that this encouraged Europe to reflect on what it had to lose. And not just to reflect, as the event came at the end of a long and successful exchange regarding relevant EU topics, which the DAAD had already initiated in 2020.

From May 2020, DAAD alumni have been formulating initial solutions in a total of eight national or regional EU Ideas Labs. This included a German-Hungarian “DAAD Alumni and Friends” team dealing with the risks to academic freedom posed by right-wing populism, and outlining the idea of a pan-European platform to support vulnerable academics. A Hungarian Ideas Lab also came up with the initiative of investigating academic communication in reporting on climate change, which is still far too strongly characterised by misleading euphemisms. The winner of the Romanian Lab posed a question regarding the psychological mechanisms that are at work in climate-damaging behaviour, and how we could overcome them.

All of this substantiates the massive potential in Europe for collaborative brainstorming – regardless of the current situation, according to EU politician and DAAD alumnus Udo Bullmann. He joined a panel discussion with his EU parliamentary colleague Siegfried Mureşan, DAAD president Mukherjee, and Green Party politician Chantal Kopf to exchange ideas on the challenges currently facing Europe. ‘You can sense the dynamism that critical free spirits can bring to intellectual engagement with major challenges when transnational collaborations are involved.’ Bullmann himself had the opportunity in the 1990s to use DAAD funds to establish contacts in Great Britain. ‘I rented a car, travelled around the universities that interested me, and talked to fellow academics about how their country will develop under the impact of European integration. To this day I’m still grateful to the DAAD for that.’ 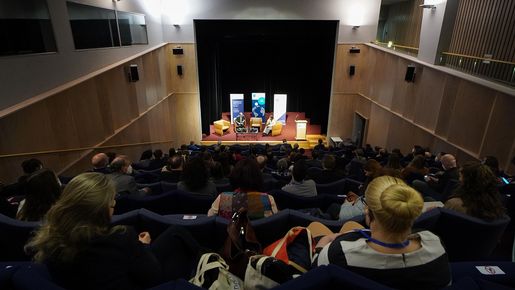 Katharina Verena Schlepper, who received a DAAD graduate scholarship to conduct research in Budapest from 2019 to 2020, has also in her own words ‘benefited extremely from the opportunity for exchange’. Schlepper was one of the participants involved in the Ideas Lab dealing with right-wing populism. She also provided input to the workshop in Berlin that considered the promotion of European values. ‘There was a superb atmosphere in the workshop, you could just tell how much the DAAD still connects us – in the sense of being generally open towards other cultures, for example, while always contributing one's own perspective’, she explains. This ability to consider multiple perspectives was also evident in the final presentation. Rather than just professing certain so-called European values and promoting them via projects, the workshop proposed the funding of initiatives that address these values themselves – thus making a decisive contribution to the formation and consolidation of that very European identity which would be so helpful in overcoming future challenges.

A preparedness for European collaboration was also reflected in the workshop entitled ‘Studying and Conducting Research in Europe’, which was moderated by Anna-Lena Sender from the DAAD Regional Office in Brussels, and whose results were presented in the French Embassy in Berlin. Michael Gaebel, DAAD alumnus and director of the Higher Education Policy Unit at the European University Association (EUA), felt that there were admittedly still institutional and national obstacles to any further deepening of higher education cooperation at EU level. ‘But it’s clear from the workshop that discussions are now strongly on a common level, that debates are being synchronised.’ Gaebel also feels that this is a credit to the EU-wide format that brings together alumni from many countries and fields of work. ‘The shared experience via the DAAD, in other words the basic realisation that you’re operating in a common higher education area, is simply a very good basis for thinking constructively about the future of European higher education institutions’, believes Gaebel, who participated in the workshop as an expert.

All of the workshops – two of them supported by the – produced policy papers which the DAAD will hand over to German parliamentarians and submit to the Conference on the Future of Europe to enable the ideas regarding Europe developed by alumni to be advanced.