DAAD alumna Mani Dhingra focuses particularly on “smart cities”: in her role as urban planner, she has been involved in an ambitious project run by the regional government of the Indian state of Haryana: five “super smart” new cities are to be built along a 135 km expressway. 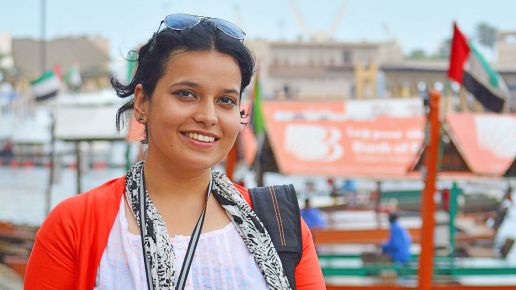 Ms Dhingra, in Germany the term “smart city” is usually used in connection with new digital technologies. How can old cities also be smart?
Because “smart” essentially means sustainable, liveable and socially inclusive. Traditional local architecture is perfectly tailored to local conditions and to the needs of the inhabitants. Old cities are often particularly sustainable and give rise to better social cohesion. I investigated this based on the example of the walled city of Alwar in Rajasthan, a region with a hot and dry climate. The houses were built using regional materials such as sandstone and chalk, and featured airy inner courtyards. The streets are narrow and shady, and the thick walls have unglazed windows for passive cooling. Traditional builders therefore managed with very simple means to create multifunctional rooms of pleasant temperature that also meet the needs of the local economy.

Can modern urban planners learn anything from this?
Yes, in my opinion intelligent traditional concepts should be given considerable consideration during the planning process. It does not always make sense to design everything from scratch. The key question is how best to combine modern technologies with traditional ideas so that cities are not only environmentally friendly but also liveable and socially inclusive. These are the three goals for smart urban planning – and this is just as true today as it was in the past.

Mani Dhingra firmly believes that planning in line with SDG 11 (sustainable cities and communities) must always take a “bottom-up” approach, starting in local neighbourhoods and addressing the specific needs of the people who live there. Her DAAD grant gave her the chance to learn the necessary methods of micro-planning. Furthermore, while in Karlsruhe Dhingra was able to further her knowledge of planning strategies to mitigate the consequences of climate change, which is likewise a central aspect of Agenda 2030. As a consultant to the Indian state of Haryana, the urban development expert helped draw up the master plan for five new smart cities. She is currently writing her doctoral thesis on the sustainability of traditional building methods in India.

Is it even possible to measure how liveable or inclusive a city is?
I believe so. For my thesis I created a scale that can be used to determine how safe the residents of a particular neighbourhood feel, whether there is a sense of community, how widely public spaces are used, whether the streets are suitable for pedestrians, and so forth. I hope that such questions will be taken more into account in future urban planning. One thing is certain: a universal understanding of sustainability will become established – thanks in part to the Sustainable Development Goals, which consider not only the ecological but also the economic and social dimensions.

Your work is helping to achieve a number of these goals, contributing for example to the creation of sustainable cities and communities. How much awareness is there of the need for sustainability in India?
A great deal has happened in recent years. When I began my bachelor’s degree in architecture in 2006, the subject played only a superficial role. Today there is much more sensitivity with regard to ecological questions. For example, many families now use water and electricity more sparingly. In my opinion, one of the biggest environmental problems is the air pollution in cities. The situation is so bad in Delhi that one cannot see very far on many days in the winter. Big changes therefore need to be made in the transport and energy sectors. The government is addressing these problems, among other things by building smart cities.

And you are involved in this?
Yes, I am a planning consultant for five model cities in the state of Haryana – my job is to mediate between the regional government and private consultants. The cities are each to be built on 500 hectares of land. Unfortunately, the projects have been delayed by the corona pandemic, but we hope that construction can gradually begin in one to two years’ time. The objective is to take greater control of the region’s inevitable urbanisation and to decentralise the process. Among other things, an effective and energy-efficient system of public transport for commuters is to be created. Currently, only Delhi has good rail links, so people elsewhere in the region are reliant on their own cars. Incidentally, I think public transport in Germany is great!

Did you travel a lot while you were at the KIT?
There were many international students in my urban and regional planning degree course, and we would always use the weekends to travel around together, exploring the villages and towns near Karlsruhe to gain an impression of local planning and architecture. It was such a wonderful time! During that semester I learnt a lot that I can draw on today – in my research and in my role as urban planner.