Even after a year of the Corona pandemic, many German universities are looking to the future with hope when it comes to internationalisation, according to a recent survey by the German Academic Exchange Service (DAAD). In particular, the expansion of digitalisation is showing positive effects. At the same time, many universities report that it was often not possible for international students to enter Germany in the past winter semester. 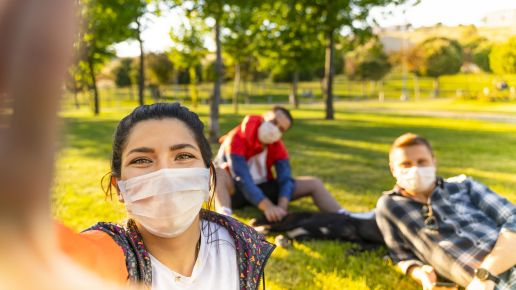 "German universities have acted quickly and courageously to minimise the negative impact of the Corona pandemic on their internationalisation activities as much as possible," said DAAD President Prof. Dr. Joybrato Mukherjee. "Despite major challenges in the entry of international students and the ongoing travel restrictions, only five percent of all universities completely suspended their international exchange programmes in the winter semester. A quarter of our member universities were even able to establish new digital collaborations abroad due to the advancing digitalisation," Mukherjee continued. International offices from 171 universities throughout Germany took part in the DAAD survey.

Optimistic outlook for the future
The evaluation of the survey data shows: Most universities look to the future with hope. Around half assume that internationalisation at their institution will hardly be affected by Corona. More than 20 percent even expect the importance of internationalisation to increase after Corona. In addition, a clear majority of almost three quarters of the universities expect that there will be a quick recovery in international student mobility after the end of the travel restrictions.

Cooperation with the USA, Canada and Finland
According to the DAAD survey, 26 percent of the universities have even entered into new cooperation agreements with universities abroad in the past two Corona semesters. The aim here was to enable students to participate virtually in courses abroad. The focus countries for digital cooperation were the USA, Finland and Canada.

Declines in entry
At the same time, almost two thirds (63%) of the universities report that international students were unable to enter Germany in the winter semester despite having been admitted. Mostly because they did not receive a visa. According to DAAD extrapolations, this means that around 14,700 international regular students and around 2,300 guest and exchange students did not receive a visa to study in Germany in the winter semester 2020/21. According to the universities, students from India, Iran, Pakistan, Bangladesh, Nigeria and China were particularly affected. Almost three quarters of the universities (72%) then offered the affected students distance learning with online courses. In addition, about half of the universities surveyed reported that during the past two semesters about one in two of their students' stays abroad had been postponed or cancelled.