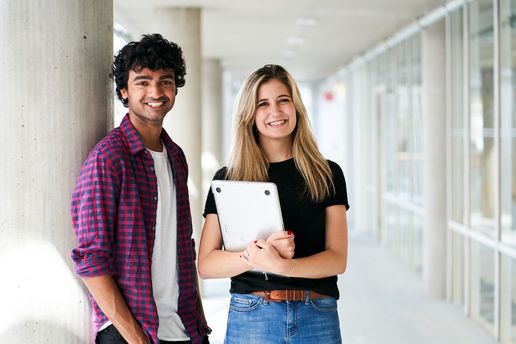 New books, meals in the cafeteria, rent: studying involves a lot of expenses. Scholarships can help you complete your degree with a little less stress. That's why it's worth knowing about the various funding providers, funding types and application modalities.

International students can apply to various organisations for a scholarship. The largest group of scholarship providers are the 13 "Begabtenförderungswerke" supported by the Federal Ministry of Education and Research. They represent important societal groups and have for example a political, religious or economic background. There are also many other scholarship providers in Germany: Smaller foundations often focus on particular subjects or cities. Higher education institutions also award scholarships. Many of them offer the ; approximately twelve percent of recipients of this grant are foreign students.

Financial support consists of a regular monthly payment over a specified period of time. In addition to contributing to students' cost of living, scholarship holders may often receive subsidies for books, health insurance or childcare. Moral support is also important to many scholarship providers. This form of support includes for example academic conferences, language courses or holiday academies. Beneficiaries also become part of a large network of current and former scholarship holders. This exchange is not only interesting on a personal level, it can also aid career prospects.

Requirements and probability of success

The DAAD offers a comprehensive range of for German and international students, graduates and academics. Funding for complete courses of study or for first-year students is only provided in exceptional cases.

Every scholarship provider is free to implement its own selection and application procedures. The traditional route begins with a written application. Application documents should include a cover letter with your CV, certificates, and assessments from teachers or professors. If your application is successful, in the second phase you will be invited to an interview or an evaluation round with other applicants. Large "Begabtenförderungswerke" have a more complex selection procedure than smaller foundations; it can include workshops, presentations and discussion groups.

TIP: First enquire in your home country whether you can apply for scholarships or other funding options.