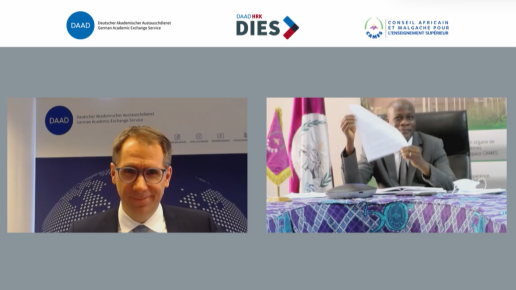 In the course of the cooperation between DAAD and CAMES (Conseil Africain et Malgache pour l'Enseignement Supérieur) and the signing of the Memorandum of Understanding in 2020, a virtual partner event took place on March 10, 2022. From fruitful discussions to a virtual city tour, everything was there.

Africa plays an increasingly important role for German and European universities, teachers and students in numerous scientific issues. The focus of the German science system is - not least due to the language skills of many university officials - often on Anglophone partner countries. Therefore, we want to deliberately broaden the focus today and put the francophone countries in the center of attention. In terms of language, the conference will also be deliberately conducted in French and German. (From the opening words of DAAD Secretary General Dr. Kai Sicks)

The event was organized through the DIES program, which is jointly coordinated by DAAD and HRK and funded by the German Federal Ministry for Economic Cooperation and Development (BMZ). The aim was to increase knowledge about current challenges and projects in the region of francophone countries in Africa as well as Germany and Europe and to promote exchange on current higher education topics.

The second part of the event offered DAAD and CAMES staff the opportunity for discussion and exchange on the topics of digitization, quality assurance, internationalization, and university and research cooperation.

The event concluded with two virtual city tours of Bonn and Ouagadougou.
In the course of the year, a new Secretary General of CAMES will be elected and the DAAD looks forward to the developments that will follow and to further cooperation.