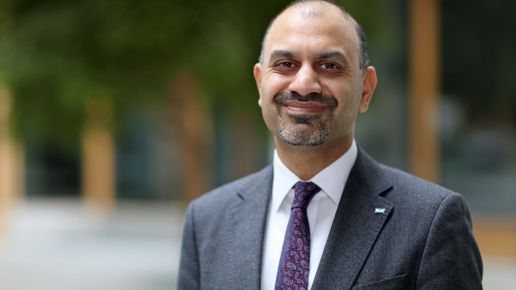 DAAD President Professor Joybrato Mukherjee talks about common European values as a guiding principle of the DAAD’s work – and universities’ responsibility to uphold them.

Professor Mukherjee, the DAAD and the Academic Cooperation Association (ACA) invited European university leaders, scholars and policymakers to Eberbach Monastery in Germany at the end of 2019 to discuss the importance of values in European higher education today. Why was it important to put this topic on the agenda?

The Bologna Declaration over 20 years ago led to the foundation of the European Higher Education Area, in which the fundamental values of the Union are firmly rooted, thereby contributing to stability in Europe. The fact that the unity of Europe cannot be taken for granted was recently shown by the unilateral national measures taken by several member states during the Covid-19 pandemic. Even before that, however, European values had already being shaken by Brexit, restrictions on basic rights in some EU countries and the growth of populism. That is why it was and is especially important to strengthen and defend common values – not only outwardly, but also inside Europe. Universities have a responsibility to communicate these values and provide space within their institutions where they can also be the subject of critical discussion and reflection. That is not always easy, especially when political forces attempt to exert influence. The realisation that our common values represent a significant achievement is becoming all the more important.

The central outcome of the gathering was the Eberbach Statement. In one passage it says it is necessary “to sound the alarm to reaffirm our core values”. These are drastic words. How did values like academic freedom and university autonomy apparently become pushed into the background? Are we focusing too often today on pragmatic questions about ECTS points and comparable degrees?

The success of the European model and especially the European economy is built on a foundation of common values that combines major societal values such as democracy, the rule of law and human rights with academic values such as academic freedom, university autonomy and transparency. This model is almost unique in the world and therefore has a great attraction for researchers, students and teachers. This involves more than ECTS points and recognition; it is about the fundamental values that are essential for free teaching, learning and research. These values have come under increasing pressure as a result of growing populism in many countries of Europe and worldwide, which is why we were especially concerned to draw attention to the situation and actively respond to it.

The Eberbach Statement is primarily aimed at Europe’s education ministers. What has the response been so far?

It was originally planned to discuss the statement at the conference of ministers in Rome this spring. The date of the meeting has now been postponed until autumn. However, since the subject is very important, we decided to publish the statement before the gathering. The occasion of the 21st anniversary of the European Higher Education Area on 19 June was therefore a very fitting.

The DAAD stands for values that are based on exchange, understanding and tolerance

Can the German Presidency of the Council of the European Union lend greater weight to the canon of values in the European Higher Education Area?

Germany should support a strengthening of research and education in the EU during its Council Presidency. These concerns should be prioritised in all discussions and cooperation on these matters further intensified at the European level. This also includes the defence of academic freedom as well as the provision of sufficient finance and support for programmes and institutions.

Academic freedom is not only an important issue in Europe. It also plays a major role in academic exchange with other regions. How does the DAAD support this subject worldwide?​​​​​​​

The DAAD stands for values that are based on exchange, understanding and tolerance. We have been successfully communicating these values for many years together with our member universities. But we should not rest on our laurels here: these values have to be upheld outside Germany and Europe too. In recent years, however, we have been seeing developments around the world – and also even inside the European Union – that are clearly opposed to the independence of higher education and the collaborative pursuit of truth, new discoveries and academic integrity. Europe’s common values constitute a guiding principle of our work, and European universities play a central role in shaping them. We also actively seek to pass on our values to our partners in other countries using the global network of the DAAD. Doing so is not always possible without hindrance in other countries, but it is therefore all the more important for universities worldwide to attempt to create space for raising and discussing issues of this kind.

“STAND UP FOR DEMOCRACY AND ACADEMIC FREEDOM”

In the Eberbach Statement the DAAD and a number of prominent European scholars, university leaders and heads of organisations call upon politics and universities to strengthen the European Higher Education Area. In the declaration, which was published just before the anniversary of the Bologna Declaration in June, the signatories call for support for fundamental societal and academic values. The Alliance of Science Organisations in Germany also supports the appeal. The goal is for the statement to gain a hearing among ministers in Europe and to be taken into national, European and international debates by its signatories.