To conclude the "German-Russian year of cooperation in higher education and research" organised by DAAD, the German Foreign Office (AA) has acclaimed 25 German-Russian research projects. The awards ceremony took place today in both physical and virtual form in Berlin and Moscow at the theme year's closing conference. 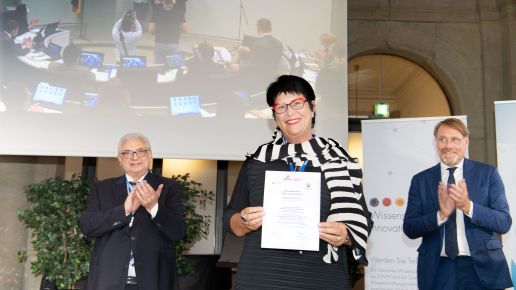 "Inter-state relations with the Russian Federation are not easy at the moment. Yet at the same time, Russian higher education, research and educational institutions have been reliable and excellent partners for German academia for many years or even decades. At the end of the German-Russian theme year, I am therefore very pleased to congratulate the 25 excellent projects for their constant and ongoing commitment to academic exchange and research cooperation with Russia," said DAAD President Professor Joybrato Mukherjee in Berlin.

The aim of the German-Russian year of cooperation in higher education and research was to present to a wider public the long-standing and diverse relationships in research and teaching between higher education, research and educational institutions in the Federal Republic of Germany and the Russian Federation. In addition to around a hundred joint events organised by research partners from both countries, the "Bridges for German-Russian higher education and research cooperation" competition was one of the key measures. 124 applications from both German and Russian higher education, research and other institutions and organisations showed the extensive commitment to German-Russian knowledge cooperation and the good relations within the research community. The winners in Berlin were honoured by Andreas Görgen, Head of the Department of Culture and Communication at the German Foreign Office, and Sergei Jurjevich Netschajev, Ambassador of the Russian Federation. In Moscow, Mikhail Schwidkoj, Special Representative of the President of the Russian Federation for International Cultural Cooperation and Beate Grzeski, Representative of the German Embassy in Moscow, presented the award certificates.

The German-Russian theme years were launched in 2014. They have so far dealt with language and literature, youth exchanges and local and regional cooperation. The current theme year 2018 to 2020 was characterised by cooperation in higher education and research. DAAD organised the theme year in close cooperation with the German Centres for Research and Innovation (DWIH) in Moscow and its partners in the German research network. On the Russian side, the National Research University (MISIS) in Moscow is involved. The theme year was intended to make cooperation and networking between higher education institutions and those involved in research more visible, to strengthen cross-border exchanges between students, researchers and teaching staff and to initiate additional cooperation between German and Russian partners.


Lighthouse projects in the theme year


The competition in the theme year

The following German institutions and organisations were honoured in the "Bridges for German-Russian higher education and research cooperation" competition:

All the excellent projects and institutions can be found on the