The German Academic Exchange Service (DAAD) will receive around 31 million euros more in basic funding for the coming year compared to the original draft budget. The budget increase is the result of last week's adjustment meeting of the budget committee for the federal budget. 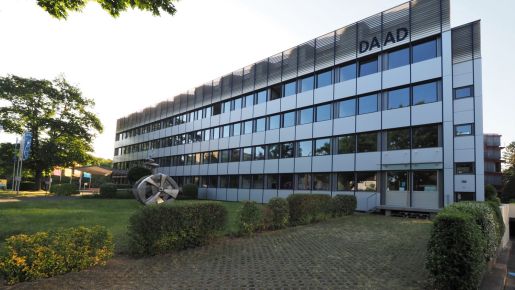 "We are very pleased and extremely grateful for the comprehensive financial increase in our basic funding in the portfolio of the Federal Foreign Office. Our thanks go in particular to the members of the German Bundestag who, in a difficult budgetary situation, have stood up for foreign cultural, educational and scientific policy. Against the background of the original budget plans, we are also pleased with the positive results of the adjustment meeting for the Alexander von Humboldt Foundation and the Goethe-Institut," said DAAD President Prof. Dr Joybrato Mukherjee.

The basic funding of the DAAD by the Federal Foreign Office (the so-called "institutional funding") will grow from a planned 191 million EUR - which would have been a reduction of around 13 million EUR compared to the 2021 budget - to around 222 million EUR, a record result so far, according to the decisions of the Budget Committee for 2023. From the DAAD's point of view, the additional funds are the start of the growth path in DAAD institutional funding that was firmly promised in the coalition agreement. "I would like to thank the Federal Foreign Office for the fact that this step has now been taken despite the challenging budget situation," said Mukherjee.

The DAAD will lobby the Federal Foreign Office to use the additional funds to reverse the cuts in short-term programmes, long-term scholarships and lectureships announced in the summer. In addition, the German Bundestag had linked its decision to the expectation of special measures such as support measures for people from Ukraine and protection programmes for people from Iran. The DAAD President said that the Federal Foreign Office would be consulted and agreed on these measures.

"I would also like to express my personal thanks for the great support we have received from the member universities and their student bodies, from our friends all over the world, from academia, politics and the public over the past weeks and months. In particular, I would like to highlight and acknowledge the touching life stories we have come across under the hashtag 'IgotfundedbyDAAD': More than 1,800 contributions from all over the world have shown us how positively and sustainably a DAAD scholarship influences the lives of young people," Mukherjee continued.

Mukherjee emphasised that there were also pleasing developments in the budgets from the Federal Ministry of Education and Research (BMBF) and the Federal Ministry for Economic Cooperation and Development (BMZ): "With the special funds Ukraine, which we have received in addition, the BMBF is continuing our budget for the coming year with around 200 million euros. At the BMZ, we are expecting an additional increase of seven million euros to around 57 million euros." This will strengthen the DAAD's commitment to exchange in higher education and research as well as in cooperation with partner institutions from the Global South.

The DAAD assumes that the German Bundestag will pass the federal budget in the now "adjusted" version on 25 November.