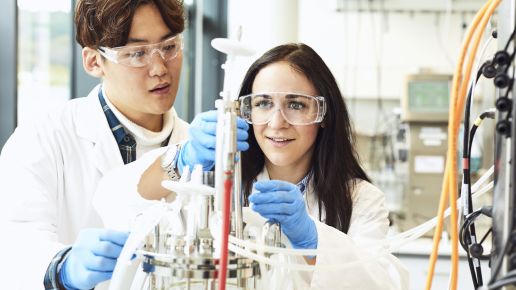 Excellent teaching coupled with a highly practical and business orientation – that is what is on offer at Germany’s universities of applied sciences, known in German as Hochschulen für Angewandte Wissenschaften/Fachhochschulen (HAW/FH). Thanks to the close ties these institutions maintain with regional and international companies, their graduates have good job opportunities. The vocational focus also means that a degree at an HAW/FH gives international students a wide range of options when it comes to laying the foundations for a successful career.

The first HAW/FH were established around 50 years ago, when they were known as “” (technical colleges). These days, many of the HAW/FH have been renamed “Hochschule für Angewandte Wissenschaften” (university of applied sciences). With their focus on applied research and teaching, Germany’s more than 200 HAW/FH account for an important part of the German higher education and research landscape, alongside the more traditional that concentrate to a greater extent on basic research. The strengths of the former include modern conditions for teaching and learning, as well as relatively small class sizes. Applicational relevance and an orientation towards vocational requirements are always prioritised. Students routinely engage in practical exercises, such as laboratory experiments or work in project groups. What is more, or practical tend to be compulsory.

Increasingly, the idea of an application-focused degree course is seen as the way forward. This is also reflected in the statistics: over the past ten years, the number of students at HAW/FH has grown constantly, with around 40 percent of all students in Germany currently enrolled at an HAW/FH. In the summer semester 2021, some 137,000 international students were doing a course at an HAW/FH. This combination of academic study and practical focus has long since become a model for higher education institutions around the world: transnational degree courses and binational universities worldwide are adopting similar concepts to Germany’s HAW/FH. Binational institutions such as the German-Jordanian University (GJU) in Amman and the Chinese-German University of Applied Sciences (CDHAW) in Shanghai are particularly valued for their highly practical focus.

Courses on offer and eligibility requirements

Because HAW/FH teach vocational skills, the range of subjects they offer is smaller than that at traditional universities. Most are in areas such as technology, engineering, economics, design or the social sciences. In addition, there are and programmes in the field of healthcare. Not only does teaching have a very practical relevance – research does, too: one cornerstone of the HAW/FH concept is the collaboration between the universities and partners in industry. Applicants for an HAW/FW professorship have to prove that they have many years of vocational experience. This is an advantage for students, as they then profit from the practical knowledge of their tutors, as well as from their personal contacts in industry.

Our offers you further information about admission requirements, , career prospects and much more.

A is required to enrol at a German HAW/FH. In Germany, this could be . Certain can likewise secure an applicant a place at an HAW/FH. Depending on subject and degree course, applicants will often also need to show that they have completed a preliminary internship, a course of vocational training or a one-year internship in their chosen field.

Prospective students can attend what is known as a Studienkolleg – a foundation course for a year – during which they can acquire the skills they will need for certain degree programmes, assuming they do not already have them. International students can use the DAAD’s to gain an initial overview, and should also ascertain as quickly as possible what the admission requirements are for their degree course of choice at the HAW/FH.

The at the HAW/FH are the right port of call and will answer questions about admission requirements and individual degree programmes, as well as about planning to live and study in Germany.

The HAW/FH are regarded as an engine for regional development and innovative capacity. Research findings are implemented there in collaboration with local companies, ensuring fast access to key technologies. This is particularly true of certain branches of German industry, such as the automotive sector and its suppliers, not to mention renewable energies. These export-oriented industries with production facilities in many regions around the world are always looking for highly-qualified specialist personnel with strong language and intercultural abilities. International students who have local knowledge from their home countries, coupled with their language skills, are in particular demand. Consequently, they have very good chances of employment after graduation – be it in Germany or worldwide.

Numerous short- or long-term scholarships and funding options are available for international students in Germany. Many of these can also be used for a course of study at an HAW/FH. More information can be found in the DAAD’s .

After graduation: a vocational or academic career

Ever since the Europe-wide Bologna Process came into effect, bachelor’s and master’s degrees from HAW/FH have been equivalent to those from traditional universities, meaning that graduates can also embark on a PhD. In addition, more and more HAW/FH are gaining the entitlement to run their own .

Thanks to close cooperation between the universities and industry, valuable internships, and academic courses that are generally vocational and oriented towards the needs of the employment market, HAW/FH graduates very often find permanent jobs after completing their degrees. Furthermore, they earn higher starting salaries on average, as revealed by a study conducted by the German Centre for Higher Education Research and Science Studies (DZHW). International alumni not only have good prospects on the German employment market, however: German and international companies are searching worldwide for specialists who boast intercultural skills. The  provides information about career opportunities and runs webinars to help with job applications.