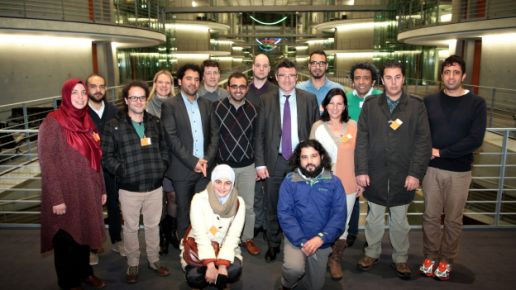 In the Middle East there is a shortage of highly qualified academics and managerial staff able to transcend religious and political boundaries and work together. Two master’s degrees that promote dialogue intend to change that.

The web-based master’s degree “Intellectual Encounters of the Islamicate World” at the Free University of Berlin, focusses on the similarities between Christianity, Judaism, and Islam. Students learn how the history of ideas, tradition, and religion overlap in the three Abrahamic religions. Participants come from the Palestinian territories, Israel, Germany and other countries.

In the master’s degree “European Studies” at Heinrich Heine University in Düsseldorf, the focus is on European integration as a peace project. Here, students engage with the normative self-understanding of the European Union with regard to pluralism, the rule of law, etc. Participants come from the Palestinian territories, Israel and Jordan.

Despite a very different study content, structure and concept, both study programmes have a similiar approach and aim. The courses themselves do not address the Middle East conflict.

As future intermediaries and mediators, graduates are expected to contribute their experience and skills in the dialogue between the participating countries and actively participate in international networks to solve regional and global challenges. In this way, they initiate and support medium and long-term development processes, thus contributing to achieving a peaceful solution to the situation in the Middle East. At the same time, the academic network between Germany and the Middle East is strengthened.

The course “Intellectual Encounters of the Islamicate World” at the Free University of Berlin is well established. Since 2013, 56 students from the target countries have commenced their studies: 28 students from the Palestinian territories, 15 from Israel, three from Germany, and 10 international students from other countries.

The course “European Studies” at the Heinrich Heine University has only been supported since 2015. Since summer semester 2015, a total of 38 scholarships have been awarded to students from the Palestinian territories and Jordan.