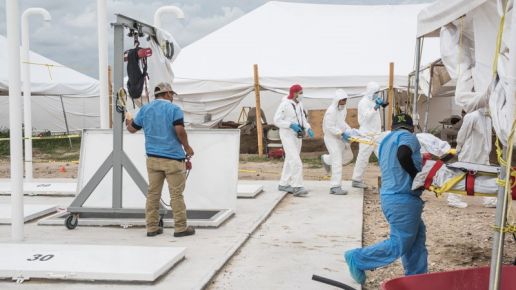 On behalf of the Foreign Office (AA), Deutsche Gesellschaft für internationale Zusammenarbeit GmbH  (GIZ) is implementing the project "Strengthening the rule of law in Mexico". In Mexico, more than 70,000 people are classed as officially missing. At the same time, there are thousands of thus far unopened graves and over 37,000 unknown deceased persons. The aim is to provide relatives with certainty by identifying more of the unknown deceased and thus to contribute to the establishment of social peace in Mexico and to strengthening trust in the Mexican rule of law.

In this context, the German Academic Exchange Service (DAAD) supports the programme "German–Mexican University Collaboration to Promote Academic Exchange between Forensic Doctors in Mexico and Germany".  Over a period of 13 months, a German–Mexican research collaboration in the field of forensic identification will be established within the framework of the DAAD–GIZ collaboration, thus improving the reputation of forensic medicine in Mexico and creating the prerequisite for the application of the results of the bilateral university collaborations in forensic medicine institutes in Mexico.

German and Mexican forensic doctors research and teach at a high level and work together to develop application-relevant results (identifying the unknown deceased in Mexico). To this end, mobility should be made possible between the participating collaborative partners, scholarships should be awarded, and the Mexican partner university should be given didactic support within the framework of curriculum workshops in order to make a valuable contribution to identifying the numerous unidentified deceased. The collaborative projects that are eligible for funding are carried out jointly by at least one German and at least one Mexican university in the field of forensic medicine or a forensic medicine institute. Partnerships consisting of several German and Mexican universities are possible.

DAAD is planning a matchmaking event (Annex 1) at the beginning of February 2021 to initiate contact with potential forensic medicine institutes. Network events or symposia are to be held in Germany and Mexico during the course of the funding period.

In addition to the academic exchange, the programme will also support the implementation of an extraordinary mechanism for identification (MEIF) in Mexico (presumably under the supervision of the Office of the High Commissioner for Human Rights, OHCHR, and with the support of the German Federal Government).

At the impact level, the programme aims to strengthen the confidence that Mexican society has in the rule of law and to contribute to the establishment of social peace in the country by helping to strengthen the reputation of forensic medicine in Mexico and to prevent cases of violent forced disappearances in Mexico.
At the same time, the programme contributes to the development of efficient and cosmopolitan universities by contributing to the internationalisation of the universities and forensic medicine institutes involved.

In order to contribute to these long-term effects (impacts), the programme pursues five programme objectives (outcomes):

The following results (outputs) are to be achieved on the basis of these programme objectives within the framework of the maximum-13-month project between universities in Germany and Mexico:

The programme is supported by DAAD, and in coordination with GIZ, by means of indicator-based and impact-oriented monitoring.