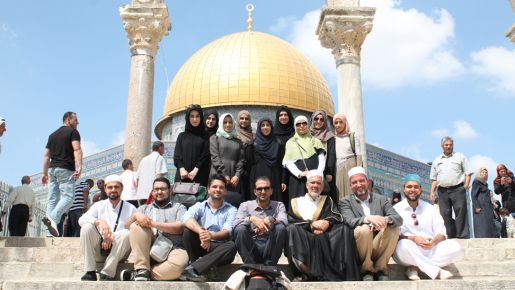 The DAAD and the GIZ support the development of bicultural master’s degree programmes for the Middle East and North Africa (MENA) at German higher education institutions and universities abroad. The main focus is on teaching regional knowledge and cross-cultural skills.

A mutual understanding of the interests, the cultural background, and the capabilities is crucial for effective development cooperation. This is more relevant than ever since the content of development cooperation has expanded from the technical level to include comprehensive economic, social, and political issues. Deficits in cross-cultural communication reduce the efficiency of cooperation.

In this context, the DAAD and the (GIZ) support the development of bicultural master’s degree programmes at German higher education institutions and universities in the Middle East and North Africa (MENA). Apart from transmitting specialised knowledge, sharing regional knowledge and the transfer of cross-cultural skills during study phases at the participating partner universities are focus points.

The programme sponsor is the (BMZ).

The programme aims to establish bicultural regional master’s degree programmes at the participating universities in the long term. Based on a demand analysis by the BMZ, the subjects of the projects were chosen according to the core areas of German development cooperation in the given region. The English master’s programmes are specifically designed to train young German and Arab academics. They take an interdisciplinary and practical approach and are designed for the regional context of the MENA region. In addition to specialist knowledge, cross-cultural and management skills are also taught.

The four degree courses are:

No further calls are planned for the time being.

The majority of graduates are working either in the MENA region or in international organisations with a strong regional focus (around one third). The practical and needs-based focus of the degree courses is strengthened by involving a variety of actors, which include higher education institutions, government institutions, organisations of international cooperation, and private enterprises.