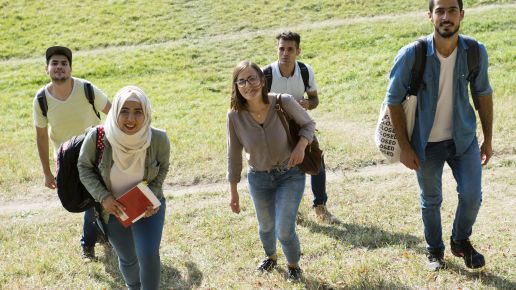 Integration – innovation – internationalisation: The NRWege programmes not only pave new paths for students with a refugee status into studying and working life, they also support North Rhine-Westphalia’s higher education institutions to develop sustainable concepts promoting structures for internationalisation in academia and society.

North Rhine-Westphalia (NRW) is Germany’s most populous state, and since 2015 has accepted more refugees than any other state. Although the challenges they face are significant, many refugees are highly motivated to pursue an education after their arrival in NRW. The state’s higher education institutions quickly recognised this enormous potential and have made a great commitment to integrating the large number of refugees who are willing and able to study. The DAAD programme (NRWege Pathways into Studying ), which has received funding from the Ministry of Culture and Science of the State of North Rhine-Westphalia (MKW) since 2017, was instituted to provide the best possible support to North Rhine-Westphalian higher education institutions to integrate these students. During the first phase of the programme until 2019, it primarily organised preparatory and accompanying linguistic and specialist courses for students. To underpin the success of the students, higher education institutions were also provided with funding to establish and expand structures to offering advice and support. 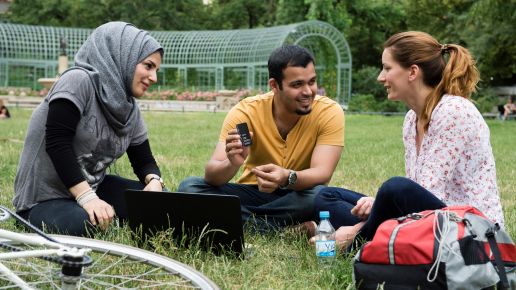 The DAAD is complementing the networking efforts and the committed work of the programme’s coordinators with regular outreach events and informational material. For instance, it organises networking meetings and specialist conferences to identify various fields of action, current best-practice examples and develop and discuss cross-institutional strategies. The intensive exchange of ideas enables the coordinators to benefit from the experience of other higher education institutions and expand their networks.

With funding totalling €50 million, the State of NRW is supporting the extensive packages of measures of the 30 participating in the programme, thereby making a major contribution to the internationalisation of North Rhine-Westphalia’s academic landscape. The figures to date already indicate that this collaboration has been a great success: each year, up to 10,000 refugees interested in studying are provided with information on all topics related to studying by the guidance centres, which were specifically established for this purpose. Since the programme began, over 7,600 persons have participated in the language and specialist courses offered. This has laid the foundation for refugees to successfully gain qualifications to study at higher education institutions, who have reported that many course participants have already succeeded in making the leap to higher education. The courses and measures, which are now also open to international students, support the internationalisation process that has begun at the higher education institutions and are leading to a diverse and culturally diverse academic landscape. In 2020 alone, the courses were attended by participants from 47 different countries of origin. 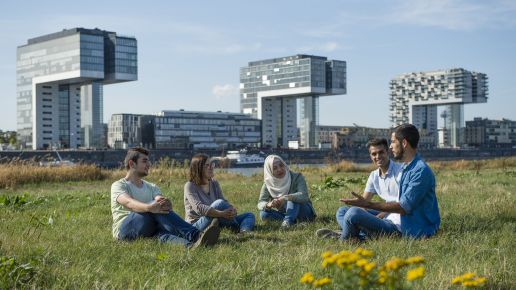 The measures introduced under the NRWege ins Studium programme are not only making an important contribution to integration and internationalisation within the North Rhine-Westphalian higher education institutions participating in the programme, they have also set off a real innovation boost. The accumulated know-how and the established structures have been continuously refined, and innovative concepts and projects have been developed. Since the start of 2020, these have been funded through the programme (NRWege Lighthouses). A total of twelve future-oriented projects at eleven higher education institutions throughout NRW were selected as “lighthouse projects”. By 2022, they will be receiving annual funding of up to €250,000. The key fields of action identified were supporting international students’ academic success in general and providing them with (further) qualifications for the German labour market. All of the programme’s schemes involve the use of digital technology.

The most recent assessments of the programme (as of December 2020) reveal that 47% of NRWege course participants are refugees who have completed their first degree, and this figure is rising continuously. To ensure this potential is fully exploited, half of the selected projects focus on providing graduates with a refugee status with training to qualify them for sustainable integration into the labour market. Particular emphasis is placed on (further) education of refugees who have trained as teachers and of engineering graduates to prepare them for entry into the German labour market.

Getting their international degrees and qualifications recognised is just one of many challenges faced by international students in the German higher education system, and these, unfortunately, often result in students dropping out of their studies early. To tackle uncertainties and consciously promote strengths, six of the lighthouse projects have developed extensive support and advisory structures. For international students participating in the projects, these structures provide individualised support by means of various approaches and objectives, in some cases while at school through to their entry into the labour market, testifying to the success of their studies.

The varying needs for the NRW projects are matched by the diversity of programmes on offer. To guide students in discovering the course best suited to them, we have drawn up short and ways to contact the organisers (German version).

For refugees and international students aiming at studying, their individual paths – from a school-leaving certificate to a dream job – are made possible by the comprehensive accompaniment provided by NRWege ins Studium projects and NRWege Leuchttürme. The programmes’ continued success depends largely on their continual development, as the target group is also constantly evolving, and with it the respective needs of students. When the programmes were first launched, their focus was mainly on language acquisition and academic qualifications. However, with the new programmes starting in 2020, the focus has shifted to study guidance and entry into the labour market, furthering the needs of the international students who can now participate as well as the sustainability of the projects. The DAAD’s commitment to supporting and evaluating the programmes is, therefore, crucial in order to be able to swiftly respond to changing needs in the future.